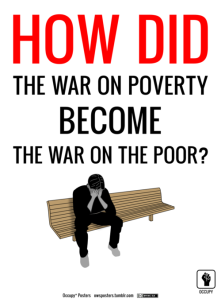 There is growing evidence, from the governments own departments, that the various workfare schemes (there are 5 different ones) are actually harming employment growth, and leading to people being ON JSA for longer.

On the 1st of April 2011, following a review of the evidence, the Social Security Advisory Committee’s report was damning. It advised the government not to introduce Mandatory Work Activity, and observed the following:

This graph shows that the statistics currently available demonstrate that workfare makes no difference to employment outcomes. As Ben Goldacre concluded: “Bottom line: it turns out people leave JSA at roughly the same rate, whether they’re doing workfare or not.”

Source: Boycott Workfare and other references.

The success rate of getting employed is little better than without the schemes, as the jobs offered would have been created anyway. In the mean time companies who’s profits are in the multi millions or even billions are getting hundreds of thousands of hours of subsidised labour. The government said the something for nothing culture must end, time to start with its self and big business first I feel.

Over all, I agree that people need experience, help, training etc. But the way it has been put in to action is what really annoys so many people. And now they are moving to force disabled and people with long term chronic conditions on to these schemes too. Most people are unaware of the draconian nature – the true picture – of the outworking of these policies. A few hours, people says, doing something useful, bolstering their chances, etc etc they are all laudable, however in reality rather than being helped to find work that is sustainable (over used term imho but useful in this context), they are being hounded in to working for weeks, months and in some cases on 2 year rolling cycles on these scheme, within which time the person is not being helped to find work that is capable of taking them off state supported and subsidised work schemes.

The injustice is that this is effecting not only the people on the schemes, but also the people who are in the work place right now, as it is effectively eroding things we take for granted these days, such as minimum wages, protection, other pay and conditions, because over all it easier for employers to use this subsidised unregulated labour.

Don’t take my word for it. Here are some very well researched and referenced facts about the workfare schemes: Click here to visit the Boycott Workfare website.

This site uses Akismet to reduce spam. Learn how your comment data is processed.